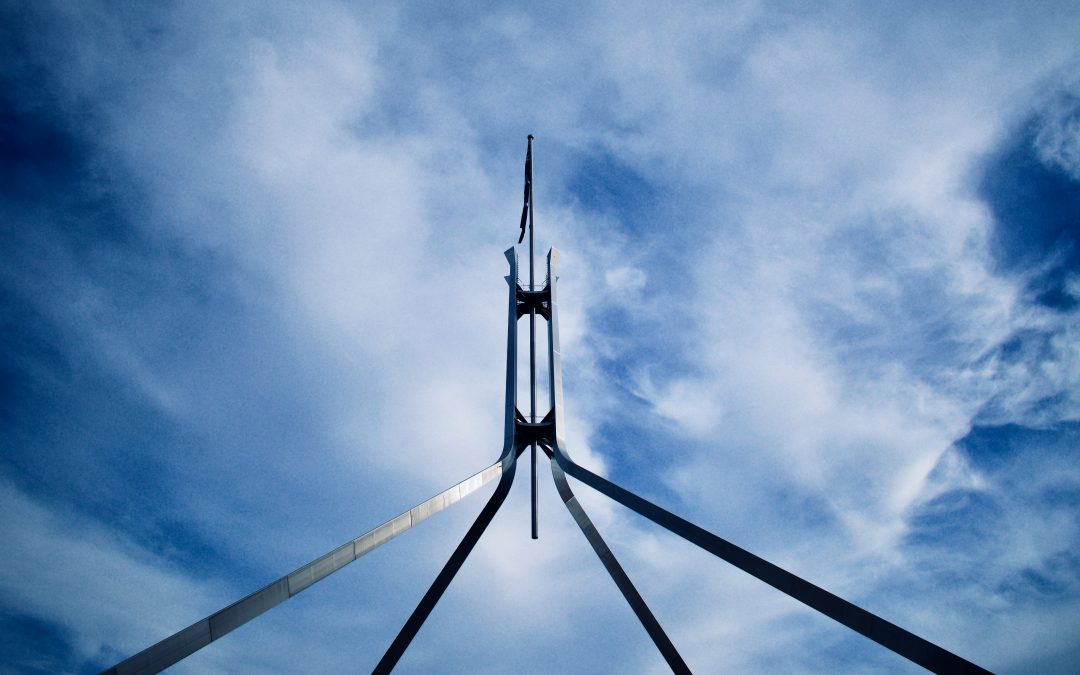 To see the previous post in this series, please click here.
See more about the upcoming Mistrust and Trust in Institutions program.

When trust is shaken: the Royal Commission
By Ross Williamson

The Australian Royal Commission is an ad hoc, quasi-judicial inquiry into a matter of general public alarm or concern. It may be a disaster (the sinking of the Voyager, the collapse of the Westgate Bridge), or the neglectful or abusive use of institutional power (Aboriginal deaths in custody, institutional sexual abuse). The common feature is that something assumed to be reliable and trustworthy – a bridge, a banking system, institutional care of the old or disabled – has failed egregiously.

Operating at arm’s-length from the government in order to ensure public trust in its findings, the Royal Commission is expected to produce a report on the issues under inquiry and make appropriate recommendations for action by the government.

Three relatively recent Australian Royal Commissions can offer us a vehicle for examining the nature of public trust in institutions and organisations – its nature, its origins and its vicissitudes.

A Royal Commission is established by the government of the day, state or federal, and the decision to establish it is necessarily a political one. The first Victorian RC, the Royal Commission on the Aborigines in 1877, contributed to the development of policies to “protect and manage” Aboriginal people in Victoria, culminating in the “Half-Caste Act” of 1886.  The very first royal commission in Victoria was directly involved in the oppression of Aboriginal people and the destruction of their society.

The Royal Commission into Aboriginal Deaths in Custody (1987–1991)

During the 1980s, rising public concern about the number of indigenous deaths in custody led to the Hawke Labour government establishing this Royal Commission. There was a high level of distrust of police and prison authorities within the Aboriginal community, and widely held beliefs that many of these deaths were due to foul play. There was increasing disquiet on the wider community after events such as the killing of John Pat, a young Aboriginal man beaten to death in police custody; five police officers were acquitted of his manslaughter by an all-white jury.

The commission made no findings of foul play in the cases it investigated, but was deeply critical of failures in duty of care on the part of police arresting Aboriginal people, leading to many avoidable deaths. The rate of Aboriginal deaths in the penal system was not notably higher than that for other prisoners, but the actual number of prison deaths was high due to the disproportionately high rate of Aboriginal incarceration.

In all, the commission produced 339 recommendations; three decades later only two thirds have been acted upon and 474 more Aboriginal people have died in custody. Aboriginal people are far more likely than non-Aboriginals to be arrested for minor offences, and being arrested, more likely to be incarcerated. Large Black Lives Matter protests in Australia in 2020 indicate a continuing high level of anger and distrust amongst Aboriginal people and their sympathisers.

In the light of this, one wonders what the Royal Commission actually achieved. Was it simply performative, designed to reassure the country, allay public concern and restore a sense of trust, perhaps to reinforce defenses against the experience of a loss of hope or was it meant to prompt actual systemic change? If the latter, it has clearly failed, and Aboriginal people remain rationally distrustful of the judicial system – while the wider community remains deeply troubled by aboriginal deaths in custody and now also less trustful of Royal Commissions..

The Royal Commission into Misconduct in the Banking, Superannuation and Financial Services Industry (2019)

It is particularly difficult to recognise and fight the force of greed. – Manfred Kets de Vries

The reputation of the major banks and their associated financial institutions were damaged by a series of public scandals relating to harmful lending practices, bad financial advice and outright fraud through the early years of this century.

In the 20th century some of the biggest banks in Australia were state owned, and the banking industry was generally regarded as conservative, stable and trustworthy. By the end of the century, they had all been privatised and had inevitably become more responsive to the requirements of their shareholders than their customers, leading to sharp practices in the pursuit of profits.

Having to rely on institutions which they had good reason to distrust was an irksome experience for many customers, and the banks’ advertising campaigns sought to convey a positive, community-minded image in response – with limited success.

There was considerable political manoeuvring in the establishment of this inquiry by all political parties, the banks themselves and the Australian Banking Association

Kenneth Hayne QC was appointed as commissioner in December 2017 and he submitted his final report in February 2019. It was a devastating condemnation of the behaviour of the major banks and financial institutions, and included 76 recommendations for action.

The reputational consequences and loss of trust in the banks was severe. There was a significant shift of funds from retail superannuation funds to the not-for-profit industry funds and of customers to smaller banks as people voted with their feet.

“trust in all sorts of institutions, governmental and private, has been damaged or destroyed”. Two years after he delivered his report about two thirds of its recommendations have not been implemented, and in focus groups conducted for the Finance Sector Union, bank workers reported that many of the practices condemned by the Royal Commission were still operating.

The aftermath of the deaths in custody and banking Royal Commissions suggests an uncomfortable hypothesis. The inquiries did not identify the failures of the relevant systems, but rather revealed their normal methods of operation! It was not a matter of correcting errors in the prison and financial systems, but of fundamentally transforming their habitual processes and cultures. Yet complex systems have inbuilt homeostatic mechanisms to resist change, and without legislative authority Royal Commissions cannot exert direct pressure for change on the systems they investigate. This requires purposeful action by state and federal governments and their agencies and systemic inertia proves time and again to be a powerful force in resisting change. Other, even less conscious forces, also seem to be at play in denial of the awareness of non-relatedness and betrayal of trust. Perhaps this is too hard to bear. It is seen even more clearly in institutional responses to child sexual abuse.

The Royal Commission into Institutional Responses to Child Sexual Abuse (2017)

This inquiry was established in 2013 by the Gillard Labour government. It was prompted by substantial public concern about institutional sexual abuse which had arisen in the previous years. Much of the publicity concerned abuse by Roman Catholic clergy and the efforts of the Church to cover up their crimes. The Roman Catholic Church was under pressure internationally, with public exposures of abuse and cover up in the USA, and the collapse of the Church’s political influence in Ireland as a result of similar exposures.

The Royal Commission’s terms of reference were wide ranging and several institutions, both religious and secular, came under examination with the final report tabled four years after the Commissions inauguration.

The central focus was on the institutional response. Denial, minimising and concealment of the offences were common strategies. Where they failed, strategies designed to minimise reputational and financial damage to the institutions were employed. The strategies employed by the Roman Catholic Church were examined in detail and widely publicised with the Church in Australia experiencing severe and enduring reputational damage, as it had in other countries.

The Commission produced numerous recommendations leading to the introduction of many administrative measures, and the Prime Minister issued a national apology to victims and their families. Notably, It was beyond the terms of reference to produce an explanation for the abusive practices endemic in so many institutions, though insight into the processes by which institutions enable abuse did emerge.

We have noted that most people have little option but to entrust banks with all their financial transactions. Even those who place little trust in banks nevertheless must rely on them – an uncomfortable dependency. This can also be what Shockley and Shepherd describe as ‘compensatory institutional trust’ – a ‘dark side to trust’ – where an individual trust in institutions defends against more frightening psychological and existential threats. I have to trust the banks because the alternative is inconceivable and can only be worse.

A common feature amongst institutions in which sexual abuse has occurred is the dependence of their clients/inmates/adherents on the institution to provide their care and community. Staff and patients, priests and parishioners, teachers and students, coaches and young athletes – the common factor is a significant power differential coupled with a duty of care. Individual acts of abuse constitute a betrayal of trust, and the Royal Commission highlighted the severe long-term effects such abuse can have. but the greater betrayal of trust occurs when institutions protect and enable the abusers.

In Childhood and Society he states that ”trust born of care is… the touchstone of the actuality of a given religion,” and “individual trust must become a common faith, individual mistrust a commonly formulated evil, while the individuals restoration must become part of the ritual practice of many, and must become a sign of trustworthiness in the community.” A clear example of the ‘dark side of trust’.

For many of the abused their families provided no haven, as any accusation against a priest imperilled the family’s position in the community of the faithful, further magnifying the initial trauma..

Erikson’s proposal about religious institutions generalises to most, if not all, institutions. Most of us, raised in good enough families, negotiate crises of trust and mistrust successfully. Faced with difficulties and dangers, the secure infant retreats to the haven of the larger, benevolent parents. This remains a preference throughout life; unless specific betrayals lead to rational distrust, we continue to prefer to trust the large and hopefully benevolent institutions. A recent example is the Australian experience of CoVid-19. When the disease was surging the efforts of state governments to control it produced solid public approval ratings, and the efforts of opposition parties to exploit process failures were ineffective. Serious crises increase support for incumbent governments unless they are blatantly incompetent, and I suggest that this is rooted in our earliest experiences of seeking comfort and support.